When I was a child my parents would often visit with family friends in Red Deer.  And on one of those visits, when I was about ten years old, I was with my parent’s friend’s son and my two younger brothers and some neighbourhood kids when something happened.  There was some sort of disagreement between me and one of the neighbourhood kids when, to my shock and surprise, he pulled out a jackknife and stabbed me in the chest.  At least, that’s the way that my ten year old brain experienced it.  I ran to the house crying, “He

stabbed me, he stabbed me.”  The four adults all inspected the wound, (in hindsight it was probably more like a scratch than a wound), pronounced that I was going to live and put a band-aid on my chest.  I think that there was a conversation between some dads in the neighbourhood about sons and how they should use their jackknives.

Now years later, and being an adult myself, I trust the assessment of my parents that I was not in a life-threatening situation.  But, at the time, it felt to me like I was. I was scared, I was shocked and I was in a bit of pain. So if that was what it was like for me to experience the point of a jackknife, imagine what it would be like to feel the blade of a sword.

Over 2,000 years ago, a mom and a dad were taking their first child, a baby boy, to the temple to perform the purification rites that their faith required.  These were good people who were trying their best to do what God required of them. And while there had been a lot of surprising events happen around the birth of this child, there was another surprising event waiting for them at the temple.  As they were entering, an old man by the name of Simeon, took the baby in his arms and said,

29“Sovereign Lord, as you have promised,
you now dismiss your servant in peace.
30For my eyes have seen your salvation,
31which you have prepared in the sight of all people,
32a light for revelation to the Gentiles
and for glory to your people Israel.”

33The child’s father and mother marveled at what was said about him. 34Then Simeon blessed them and said to Mary, his mother: “This child is destined to cause the falling and rising of many in Israel, and to be a sign that will be spoken against, 35so that the thoughts of many hearts will be revealed. And a sword will pierce your own soul too.”  (Luke 2:29-35)

Mary’s child was unique, and we are looking back at the events of that time with the advantage of knowing how the story ends.  But think how it must have been for Mary when Simeon said that a sword would pierce her own soul.  The sword described is a large,

broad, two-edged sword and to have such a sword run you through would mean a painful and certain death.  So Simeon is prophesying that Mary is going to experience great pain in her inner being because of this child.

And Simeon’s prophecy came true.  With the birth of Jesus, Mary experienced this great irreversible change.  Nothing was ever the same for her.  In Jesus’ early years, Mary’s life was focused on caring for him.  In Jesus’ later years, she still had reasons to be concerned for him.  For the rest of her days, Mary’s life was intertwined with Jesus’ life.  Any fondness she may have felt for her younger days was now hopeless nostalgia, for those relatively care-free days were gone.

Along with the dramatic changes came some disappointments.  Like any other mother, Mary likely had high hopes for her son, and those hopes were likely heightened by all the supernatural events that surrounded his birth.  Her son was supposed to be the Messiah, the Saviour of his people, and yet his traveling preaching ministry and the fans and the foes it attracted, moved Mary and the rest of her children to stage an intervention to try and get him to leave his hair-brained antics behind and come home.  But he wouldn’t come home.

And then there was the grief.  Never was Simeon’s prophecy of soul pain more accurate then when Mary stood at the foot of the cross of her son, and watched him suffer and die the most painful death one could imagine for something that he did not do.

And all this terrible pain that Mary was experiencing was because she was a mother.  Today is Mother’s Day, a day when we thank God for mothers.  And while our hope and our prayer for mothers is that their loving service may be a joyous endeavour, this passage from the Bible reminds us that with motherhood also comes soul pain.

There is the pain of irreversible change. The culture tells us that young, fit, toned and tanned women are the ones who are most desirable.  But most women give up on gaining a great body when they have a baby.  And the days of doing what you want when you want are exchanged for days and nights of doing what baby needs when baby needs it.  And that doesn’t change when the baby becomes a child and the child becomes an adult.  Those ties and concerns are still there.  And now some mothers find themselves in the sandwich generation, caring for two generations at the same time.

Along with the changes of motherhood, come disappointments.  Perhaps as your child grew up, they have not met your expectations.  In your mind’s eye, you had a picture of how things could be, but reality has fallen far short.  Or maybe your disappointment arose because your child isn’t as healthy as you hoped.  Several years ago, I met a grandmother who told me about her daughter who was now raising a child as a single mother.  Things didn’t start out that way.  Her daughter was married when her son was born.  But the child was born with several severe physical deformities and the father could not accept the brokenness of his son.  So he left the marriage and abandoned his son leaving the mother to care for him on her own.  I’m sure that that mother did not expect that her life would turn out that way, but it did.

Or maybe you are experiencing maternal soul pain because of grief.  Maybe you are grieving over the brokenness of your child.   Or maybe your grief is for the child who is not there.  Maybe you have lost a child through a miscarriage or through a death later in life.  And so you understand very well what Mary felt when that sword of anguish pierced her soul.

But there is another kind of soul pain that sometimes settles in a mother’s heart.  And that is the soul pain of guilt.  There are many mothers who regret some of the choices they made as they raised their children.  Perhaps you’ve said to yourself, “If only I had done a better job as a mother, my children would have turned out better.”  Or maybe you had an abortion when you were younger and now you regret what you have done.

There is a distinction that needs to be made between actual guilt and false guilt.  False guilt occurs when we feel guilty for something that really is not our fault.  For example, many parents believe that if you do all the right things as a parent, your children will turn out alright.  But as Pastor Roger Sonnenberg stated in a seminar here at Walnut Grove Lutheran Church, that belief is not true.  God was the perfect parent and look how his kids turned out.  And if we think that we can do a better job than God, then we are making ourselves better than God, which isn’t a good thing to do.  We do the best we can as parents, but eventually a child becomes an adult and they become responsible for their own choices.

And for the soul-piercing pain of our actual guilt, our grief, our disappointments and the losses that come with the great changes of motherhood, we look to Mary’s son.  For it wasn’t just Mary that was pierced on that Friday so long ago.  After Jesus had died, a soldier came along and rammed his spear up into his ribs.  A 1986 article from the Journal of the American Medical Association suggests that the spear was likely thrust into Jesus’ 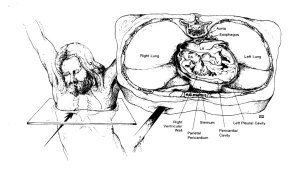 right side, puncturing his right lung and piercing the thin-walled right ventricle of his heart, releasing a small amount of fluid from the pleural cavity and the pericardium around the heart, along with a large amount of blood from the heart itself.[1] This seems like the cruellest blow of all.  Why, after all that had already happened to Jesus, did this soldier have to thrust his spear into his side? After all, Jesus was already dead.  But the answer is simply this:  he wanted to make sure.  The soldier wanted to make absolutely sure that Jesus really was, completely, totally, absolutely dead.

God loves you.  And he is both a good God and a great God.  And so you can trust him with all of your disappointments and grief.  For our God has the ability to take our soul pain and turn it into something beautiful in the glory of his eternal kingdom.  After the resurrection of Jesus, Mary was part of that group of believers who huddled in the Upper Room waiting

for the outpouring of God’s Spirit on all of Jesus’ followers.  And so she was able to see how the story ends.  Yes, there were disappointments and grieving along the way.  But to see the risen Jesus face to face, it was all worth it.  And, one day it will be the same for us.  Jesus is coming back to this world in a way that everyone will see him.  And when we see him face to face, we too will say, it was all worth it.  Amen.

(shared at Walnut Grove Lutheran Church, Langley BC on 9 May 2010.)