For the Mighty One is holy,
and he has done great things for me.
He shows mercy from generation to generation
to all who fear him.
His mighty arm has done tremendous things!
He has scattered the proud and haughty ones.
He has brought down princes from their thrones
and exalted the humble.
He has filled the hungry with good things
and sent the rich away with empty hands. (Luke 1:49-53 NLT) 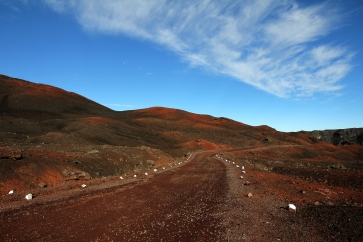 built a road through his kingdom. The road ran from the highlands in the north to a major seaport in the south. And the purpose of the road was to give the people an opportunity to prosper. With a secure, safe, all-weather road, the people of the land could travel to sell the vegetables, wool and livestock that they produced and to provide specialized services like shoe-making and cabinet making in far off places.

However, once the road was built, very few people travelled upon it because there were no places along the way for travelers to stop for the night and replenish for the journey. This was the time before trucks, buses and cars and only the wealthy had horses, so most people walked.

So that more people could use the road, the king invited his subjects to volunteer to build a roadhouse every 15 miles along the road. The king specified that at each location a tower should be built so that members of the king’s army could watch the road and make sure that travellers would be safe. Each location would also have an inn and each builder would serve as the innkeeper providing free food and lodging for the travellers that passed his or her way. The king would provide all of the materials for the tower and the inn. He would also provide the land where each tower and inn would be located and he would also give additional land to raise the food needed for the travellers. All each builder had to provide was their willingness to build and to serve.

Now this was a problem in that day and age because the society of that time had very clear layers. Those with wealth or large holdings of land or sought-after skills like being able to chase a hard rubber disk over a frozen pond were the people that others looked up to and envied. But at the very bottom of that society’s staircase were those who worked with their hands, common labourers like builders and servants. So the number of volunteers was less than half what was needed to build a tower and inn every 15 miles along the road. The king decided to work with the willing and begin with the volunteers that he had.

There was one volunteer who looked like a perfect candidate for the position. His name was Bert. Bert’s father was a carpenter and Bart had apprenticed under his father while growing up. Bert’s mother managed a small inn and so he was familiar with what it took to care for travelers who were hot, dusty, hungry and thirsty after a long day’s travel on the road. So without hesitation, the king picked a spot for Bert to build a tower and an inn.

Bert’s tower went up very quickly. But the design departed in some significant ways from the king’s specifications. Bert built an extra story onto his tower and that extra story was made into extravagant living quarters for his family. When the tower was complete Bert quickly moved his family into the penthouse suite that he built for them. The view up there was amazing. But those living quarters required more of building materials that the king had supplied which left fewer left over for the inn. So the inn ended up being a drafty shack that let the heat out and let the dust in. It took a long time to climb up and down the stairs each time a guest arrived, so Bert made the inn into a self-serve location where people checked themselves in and checked themselves out. The food was the same thing every day, a foul-smelling pot of mutton stew left to cook over an open hearth. Because no one tended it, sometimes the meat in the stew was raw, other times it was burnt to charcoal-tasting mess. Those travellers who dared to stay at Bert’s location only did it once and never again.

Word got back to the king about what was happening at Bert’s roadhouse. The king was very displeased with this servant-builder and so he asked Bert to come to his castle one day and explain why he did what he did.

“Why dear king, don’t you know?” Bert replied. “I do what I do because I need to take care of myself and my family. I know that I am on my own in this world. I cannot trust you to take care of me. You have other things to look after in your kingdom and you needn’t be bothered with looking after me. Those travellers will be just fine. I have set things up so that they will have a place to stay as you wish. You do not need to worry about me, dear king.”

The king responded, “But I am worried about you. You don’t seem to understand that the purpose of this road is to bless the people and the purpose of the roadhouses is to help people to use the road. Your purpose is to serve the people on the road not yourself. I love my people and I love you dear Bert. But you cannot see that I love you because you do not believe that I love you. And because you do not believe that you are loved, then you fail to love others. I promised that I would provide you with what you needed to serve others, and you took what I gave you and used it to serve yourself. It is time for you to go back to your father’s home until you are able to learn that the essence of building and serving is love.” So Bert and his family went back to his father’s home where they lived in a little hut out back. And the king sent his men to tear down Bert’s tower and the rickety shack of an inn. And then the king asked someone else to come and build and serve in Bert’s place.

Among all the people who volunteered to build and serve on behalf of the king, there was one with a very unusual background. His name was Brett. Brett’s father was one of the wealthiest men in the kingdom. As a young child, Brett had played in the royal nursery with the king’s own son, the crown prince. Brett was educated by some of the finest tutors in the land and he was trained in all the skills of being a knight, for his father had hoped that he would be a commander in the king’s royal army. To continue in that direction would have been an easy thing for Brett to do, but he chose another path. Brett  loved the king and he loved the king’s family. He loved the crown prince like he was his own brother. And Brett knew how important this road was to the king’s heart. The king had built that road at a great cost to himself because he wanted to bless his people, but that road would only be a blessing if the people used it.  And building a roadhouse would help the people to use the king’s road.

So Brett stepped away from his wealth, his position and his inheritance and he volunteered to be a builder and an inn keeper for the king. The king questioned Brett and asked if he was certain about his choice, for he was stepping away from much worldly wealth. And the young man nodded and with a smile on his face said, “Yes, I am certain.”

So the king set before the young man a map and designated the location where he would build. The young man was very determined to serve his king well, so he made sure that both the tower and the inn were well-constructed. He served his guests well, making sure that they had the best rooms and the best food, while he lived in a small hut in the back. The king noticed how Brett was building and serving and he invited him to train others to do what he was doing and then go build and serve in a second location. Which he did. And when the king saw that he was building and serving in the second location in the same way that he did at the first, the king invited him to build at a third location, and then a fourth, and so on.

The king was very pleased with this unusual servant-builder and so he asked the Brett to come to his castle one day and explain why he did what he did. “Why dear king, don’t you know?” Brett asked. “I serve you in this way because I love you. And what is more, I know that you love me. You have shown great kindness to my family when my father was permanently injured in the Battle of Iron Creek. He was no longer able to fight or even to work and yet you made sure that there was money in our coffers and food on our table. You have cared for us and supported us all these many long years and for that I am eternally grateful. You have never failed us when we needed you. So how could I turn my back on you when you needed me?

The king blessed the man and sent him on his way. As word spread about the roadhouses that the king had built along his road, more and more people began to use the road. Those who did prospered as they travelled the road to buy and sell goods and provide services in far away places.

And sometimes at night, when the guests were all well-fed and sound asleep in their beds, Brett would go outside and look up at the stars and he would begin to sing: “Oh, how my soul praises my Lord. How my spirit rejoices in my King and Saviour! For he took notice of his lowly servant, and I realize that I am truly blessed.”

Dear friends, here is the lesson of the story. The king is God. God loves his people. So God the Father built a way of salvation through his Son, the crown prince, Jesus. God offers to everyone life on the solid ground of salvation, forgiveness and eternal life which he gives us through Jesus. When we humble ourselves and turn our hearts away from power, privilege and possessions to live on the solid ground that God provides, then we have peace, because the things that Jesus gives us can never be taken away from us. And Jesus is able to work in and through us to bless others and help them along God’s way of salvation.

However, when we take what God gives us and use it to gather power, privilege and possessions for ourselves, then we will never have peace. We will always be insecure, because the things that we gather and build up for ourselves can always be taken away from us. Sometimes, because he loves us, God shakes or even shatters our human-built towers to bring us back down to the solid ground of his love. The key to peace is living on the solid ground of God’s love.