Today we are continuing our look at authority and why authority is important to us.  Last week we looked at Romans 13 and we learned how God has established authorities, how he has put them in place for us and that we ought to obey them because when we disobey them we are actually disobeying God.  So let us consider this question as we begin:  Why is it important for us to obey authority?

One reason is this:  when authority works as it should, it gives protection to those of us under authority. 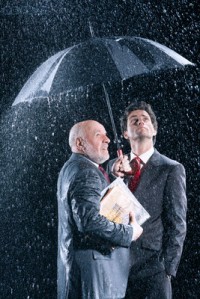 Bill Gothard of the Institute of Basic Life Principles describes authority as being like an umbrella.  And generally speaking, under each umbrella there is a person charged with that particular authority.  We could say that they are the one holding the umbrella.  And when we are standing under the umbrella of authority, that is, when we are submitting to the authority over us, we are protected by that authority much like an umbrella protects us from the rain.  For example, if you are driving the speed limit you will be protected from getting a speeding ticket.  But also, if everyone is driving the speed limit the highway will be safer for everyone.  So there is that kind of protection for all of us.  Conversely, if we go outside of the umbrella, if we step outside of the authority, then we are subject to dangers of many and various kinds, like the aforementioned speeding tickets, but others as well.  So that is one of the reasons why authority is important for us.  God has placed authority over us to protect us.

To give another example, as a pastor, I am under authority.  I am under the authority of this congregation, but also of our denominational leaders and under God.  So when I operate in obedience under those authorities, then I have the protection of those authorities.  If I step out on my own and do my own thing, I don’t have that protection anymore.  So that is one of the important positive aspects of authority.

But here is something that is important to remember.  Human beings are subject to failure, subject to sin.  And the human beings that are in authority can make mistakes, can sin, can even cause those underneath them to sin.

In the early 1960’s, a psychologist by the name of Stanley Milgram, a professor at Yale Unversity, conducted an experiment to study this particular issue of obedience under authority.  And here is a video clip that describes the experiment for us:

Right off the bat, I want to inform you that the other person in the experiment, the learner, was not receiving any shocks.  And the voices that you heard were pre-recorded and played in response to the various levers being pressed so that the person in the room with the professor would hear them.  But I have a question for you:  Out of the twelve participants who were part of the experiment, how many, do you think, went all the way to giving the maximum shock of 450 volts, which was lethal?   Think to yourself and choose a number between 0 and 12 and then turn to the person next to you and share your answer with them.

Psychologists have developed a couple of theories to explain why this happens.  One of these theories supposes that it is the pressure to conform that drives the participants to obey.  That is, the participant, who is in the same office as the professor, wants to be on the same side as the professor and so that is the reason why they do what they do.  But another theory, and it may be a more widely held view, is that the person who is pressing the levers actually abdicates some of their personal responsibility and transfers it to the professor, who is the authority figure in the room.  And when that happens, ordinary people become capable of anything.  And my hope here this morning is to encourage you to be like the three who stopped the experiment, instead of the nine who gave over their personal responsibility over to the authority of that professor, who really had no power over them, except to suggest.

There is a story in the Bible that sounds very similar to Stanley Milgram’s Obedience to Authority Experiment, with one very, very important difference.  That story is found in Genesis chapter 22:

1 Some time later God tested Abraham. He said to him, “Abraham!”
“Here I am,” he replied.

2 Then God said, “Take your son, your only son, Isaac, whom you love, and go to the region of Moriah. Sacrifice him there as a burnt offering on one of the mountains I will tell you about.”

3 Early the next morning Abraham got up and saddled his donkey. He took with him two of his servants and his son Isaac. When he had cut enough wood for the burnt offering, he set out for the place God had told him about. 4 On the third day Abraham looked up and saw the place in the distance. 5 He said to his servants, “Stay here with the donkey while I and the boy go over there. We will worship and then we will come back to you.”

8 Abraham answered, “God himself will provide the lamb for the burnt offering, my son.” And the two of them went on together.

9 When they reached the place God had told him about, Abraham built an altar there and arranged the wood on it. He bound his son Isaac and laid him on the altar, on top of the wood. 10 Then he reached out his hand and took the knife to slay his son. 11 But the angel of the LORD called out to him from heaven, “Abraham! Abraham!”
“Here I am,” he replied.

12 “Do not lay a hand on the boy,” he said. “Do not do anything to him. Now I know that you fear God, because you have not withheld from me your son, your only son.”

13 Abraham looked up and there in a thicket he saw a ram caught by its horns. He went over and took the ram and sacrificed it as a burnt offering instead of his son. 14 So Abraham called that place The LORD Will Provide. And to this day it is said, “On the mountain of the LORD it will be provided.”

15 The angel of the LORD called to Abraham from heaven a second time 16 and said, “I swear by myself, declares the LORD, that because you have done this and have not withheld your son, your only son, 17 I will surely bless you and make your descendants as numerous as the stars in the sky and as the sand on the seashore. Your descendants will take possession of the cities of their enemies, 18 and through your offspring all nations on earth will be blessed, because you have obeyed me.” (Genesis 22:1-18)

It sounds a lot like Milgram’s experiment.  And it was a test of Abraham.  But there is one very, very important difference between the story of Abraham here and the Milgram experiment.  And that is, Abraham was stopped before he pressed the lever that administered the fatal voltage.

You see there is another story behind this story:  In that day, amongst the people of that region, it was common for them to sacrifice their children to the gods that they worshipped.  And part of the significance of this story to us, as it has been passed down to us through the generations, is that we have a God who does not ask us to sacrifice our children to him.

Because centuries after this event happened, on a lonely hill outside of Jerusalem, God provided the ultimate sacrifice.  God became the ultimate sacrifice.  For there it was that Jesus Christ was bound and laid on the altar of the cross.  And this time the fatal blow was not held back.  He suffered and died for you, for me and for the whole world.

And so how do we proceed with this issue of authority?  There is an example that we can look to in a monk who lived several centuries ago in the 1500’s.  This monk’s name was Martin Luther and in his studies of the Bible he came to an awareness of what the Gospel was all about and then wrote a series of books about it.   And he was called to account for his actions. He was called before a Diet, a special meeting of all the authorities of the land.   And there arrayed before him was the Emperor and all the princes and the church leaders of what we would call Germany today.  And he was asked on April 17, 1521, to recant what he had written.  He asked for more time and so the next day, April 18, he appeared before that group again and here is what he said:

Since then Your Majesty and your lordships desire a simple reply, I will answer without horns and without teeth.

Unless I am convicted by Scripture and plain reason—I do not accept the authority of popes and council, for they have contradicted each other—my conscience is captive to the Word of God.  I cannot and I will not recant anything, for to go against conscience is neither right nor safe.  God help me.  Amen.[1]

And Luther said these words even though he risked his life by saying them and others who had said similar things had died because of it.  So, like Luther, we pray for and we obey the authorities in our lives, and we give to them the honour and the respect that is due to them because of the position that they are in.  But the allegiance that we have to earthly authorities is ever and always a secondary allegiance.  Our ultimate allegiance is to the three-in-one God.  He is the One who has saved us.  He is the One who holds us in the palm of his hand.  It is to him that we belong.  It is to him that our consciences are captive.  And so we obey authorities, but ultimately we obey God.  Here we stand.  We can do no other.  Amen.

(This message was shared at Walnut Grove Lutheran Church, Langley BC on 25 July 2010.)